Aperitivo: The Aperitif of Spain 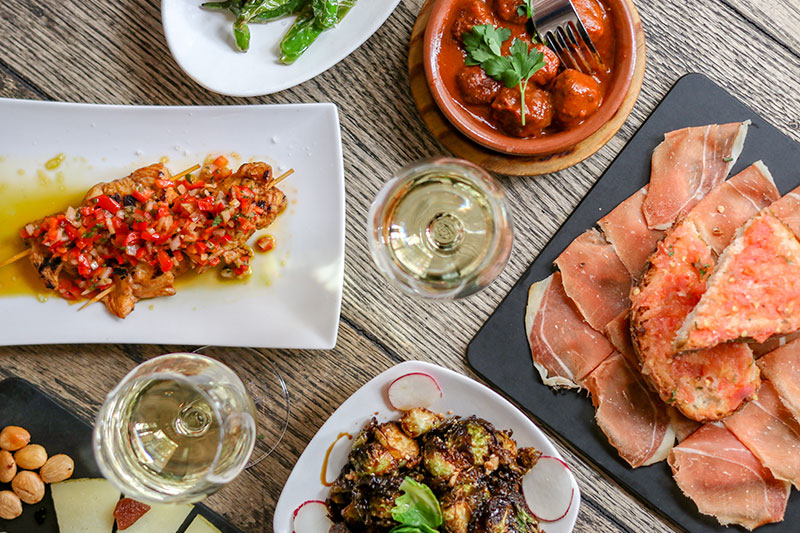 Have you ever heard the Spanish word aperitivo? You can see it is close to the English word aperitive, so you can imagine it is somewhat related, but do you know the cultural difference behind that similar word?

In the US, when we think about aperitive, we mostly think about a drink, for example, a wine or a beer. In Europe, especially in Spain, it is more complex than that since it also includes something to eat. It usually consists of something small, like a tapa or two to accompany the drink.

In many European countries like Italy or France, the aperitive eating part is reserved for special occasions or celebrations, while in other countries like Spain and Portugal, it is a much more common thing, often daily. In Spain, it is mostly a lunch habit, while in other countries it is related to dinner. Keep in mind that the average lunch break in Europe is much longer than in America, a lunch break can easily last 2 hours or more depending on the day and location. It is the perfect time of the day to share an aperitif with friends before lunch, most commonly practiced during the weekends.

History of the aperitivo

As far back as Hippocrates himself, the creator of medicine, bitter drinks were mixed up to help the stomach open to stimulate appetite, mostly in sick people. It was during the Middle Ages that the theory of how bitter beverages stimulated the taste buds was understood, the drinks stimulated the saliva process and thus increased appetite.

People saw that eating a bit of food along with the drink prepared them better for larger feasts, stimulating both the saliva and stomach acids.

The composition of drinks used as an aperitif evolved. The modern version of the aperitive drink was born in Turin (Italy) in the 18th century, and with time it became known as vermouth.

As explained, eating a small amount of food with an alcoholic beverage (a beer, a glass of vermouth or a more traditional wine) basically tells your stomach and your digestive system “Prepare yourself, food is coming.” The goal is to try to stimulate various taste buds, using all tastes: bitter, sour, salty, sweet and even umami if possible.

To achieve that, dishes are prepared with ingredients to stimulate different parts of the tongue. Some of our most popular Spanish dishes that will stimulate your appetite are patatas bravas, fried potatoes with spicy sauce, fish and seafood, like anchovies and octopus, and olives in all sorts of mixes. Basically, they are tapas that are designed to stimulate your appetite, not to satisfy it (although our tapas are pretty satisfying).

At Socarrat, we are proud of the aperitivo tradition and we strive to make it a part of our menu. To excite your appetite before having one of our delectable paellas, try choosing something from our “Snacks & Boards” section.

One of our most popular snacks is the “Pimientos de Padrón” (shishito peppers), which are sweet peppers, with sea salt. The combination of flavors is sure to wake up all your taste buds. We also offer “Almendras y Aceitunas” (almonds and olives), that not only have a variety of tastes but also textures.

Our boards’ section has a wide selection of Spanish Jamón and Quesos (ham and cheeses) to choose from, that are sure to prepare you for the main course! You can learn all about our ham selections from our “Serrano vs Ibérico” blog post.