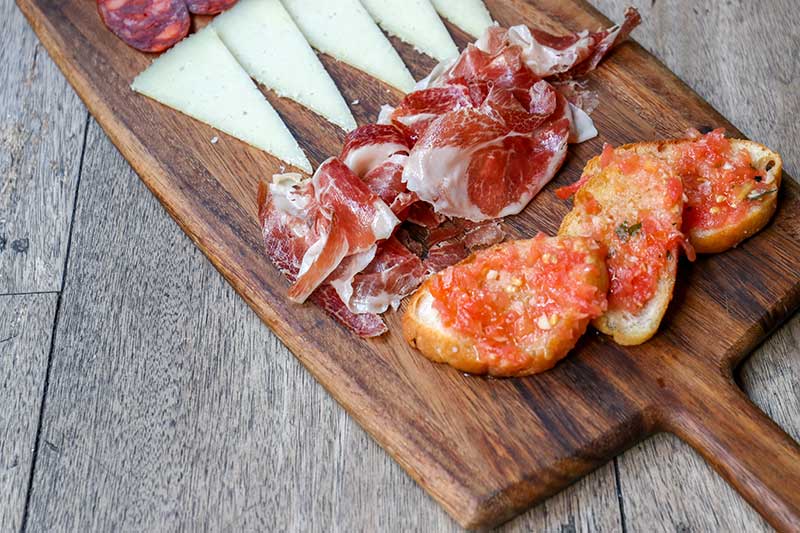 If you have ever been to Spain or Portugal, you know they just LOVE ham. In every meat shop, you will see entire pork legs hanging from the ceiling or covering the walls. In most supermarkets, you will have a large section dedicated to them as well.

Contrary to what is mostly eaten in America, most Spanish hams are cured, dried and aged as a method of preservation, leading to their exemplary jamón. You could say it is a giant jerky of ham. If you investigate a bit, you will see that not all Spanish hams are equal, as reflected by the price tag.

In Spain, you have the rather famous and popular jamón Serrano, which is what most people there eat on a regular basis. Then you also have the jamón Ibérico which is more exclusive and more expensive. You also have many other options for Spanish ham (Teruel, Los Pedroches, Dehesa de Extremadura, etc.), but the Serrano and Ibérico are the most famous and important varieties of jamón.

The Serrano ham, for its origin, is not much different than the white ham or cooked ham you find at your favorite American grocery store and is coming from a variety of white pig races, often mixed up amongst themselves: Duroc, Landrace, Large White and Pietrain, but not Iberian. The main difference is that the meat is boiled or baked to get York ham or cooked ham, while the Serrano ham is cured and dried.

The pig essentially eats grains and legumes mixed in a balanced animal feed (fodder) and spends all its life in captivity, which means it will have less fat in its meat.

The pork meat is first cleaned and trimmed before spending two weeks inside tanks or piles of salt to remove moisture and begin the preservation process. Then the hams are rinsed and brushed to remove any salt in contact with the meat, then hung up to dry for about six months in a controlled environment. For their final stage, they are hung in a cold dry place for 6 to 18 additional months. The exact time will mostly depend on the climate and size of the ham.

The finished Serrano is categorized into three quality groups:

Interesting fact: Those Spanish hams end their curation in high drying sheds, usually located in mountains, and that is the origin of the name: mountain ham = jamón serrano.

We could say that the Iberico ham is the best quality of Serrano hams since it is cured essentially the same, but with a few important distinctions.

The first of those differences is the race of the pigs. It has to come from either pure Duroc or Iberian pig breeds. For the highest type, it can only be Spanish Iberian pigs, also known as Spanish Black Foot pigs. The name of the ham then comes from the pig’s race, rather than from its curing method.

Another big difference is the lifestyle of the pig. The Iberian pig’s diet is similar to the white pigs described above but the Iberian pig has mountain pasture added to its diet, which will marble its meat with fat. The pig’s diet also has an important distinction; acorns. The acorns are so important, the amount of acorns eaten by the pig will determine the final quality classification of the ham.

The curing is similar (with some variations in climate conditions) and the curing process takes up to a year more than for Serrano hams, reaching up to 36 months. The difference in the pig race, the pig’s lifestyle, and the extended curation process explain why the Iberico ham is more expensive than the “common” Serrano ham. Spain is the biggest producer of curated ham in the world and, not surprisingly, the biggest consumer too.

Try them both at Socarrat NYC

Our menu features three boards for you to enjoy this Spanish delicacy. We have a board of Serrano ham (jamón Serrano), of Iberico ham (jamón Ibérico), and the Campero board, which includes Serrano ham, and other products from Spain like chorizo Ibérico and Manchego cheese, accompanied by crostini bread.

You can also try our amazing tapa Vieiras con Ibérico, which is sautéed scallops, 5 Jotas Iberico ham, asparagus, and soy mayonnaise, or our Jamón toast, available for lunch, that has Serrano ham, tomato spread, Manchego and balsamic oil.

However, if you are thinking of catering an event, and you would like to offer a board of Spanish ham, you can contact us.