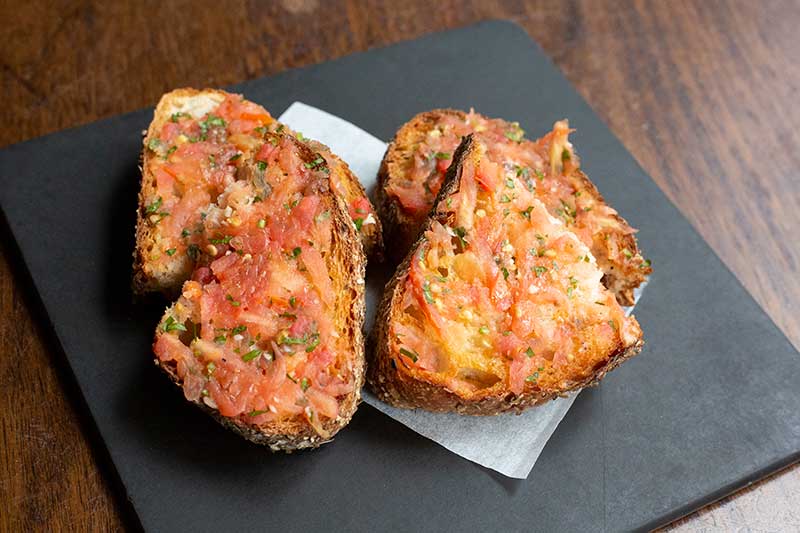 One of the classic food items you will encounter if you spend any time in Spain is the Pan con Tomate (bread with tomato). Contrary to many other Spanish cuisine recipes, like the paella, the pan con tomate is fairly recent, only dating back to the very end of the 19th century.

You will find this simple and delicious tapa recipe all over Spain. It is sometimes called pan tumaca, which is derived from the Catalan name pa amb tomàquet.

Depending on the region and local tradition, there are some slight variations on the bread used (not so important, as long as it is not commercially sliced bread) or the way the tomatoes are processed (rubbed, squeezed, crushed). But in all cases, it can all be summarized as a piece of bread, with olive oil, garlic (or not), salt and tomatoes.

You may wonder how this simple tomato spread recipe earned its fame across Spain. It happened by accident apparently. Although Spanish people have indulged in bread and olive oil for many centuries, they just ate it as such. It was always a part of what we know now as the Mediterranean Diet. The fact that it is easy to make certainly played a role in its popularity.

Apparently, there was an excess of tomatoes in Spain in the 1880s and some farmers began to use their fruits to damp stale bread and make it more interesting to eat. A new tradition was born and continues on until this day.

The reason why pan con tomate doesn’t date back as far as some of our other recipes is because tomatoes were not found in Spain. Tomatoes, just like corn and potatoes, were discovered in the New World (America) … and brought back to Europe. In fact, the word tomato originates from the Aztec word tomatl.

How and when to eat it

Similar dishes can be found in European cultures along the Mediterranean Sea, but no other country has made it a staple in the way Spain has.

In Spain people eat pan con tomate as a tapa, either on its own, or to accompany a larger dish. That can range from ham (Serrano or Iberico), cheeses, omelets, meats, poultry, fish and seafood. It is similar to the American tradition of having buttered rolls at the dinner table, except they put oil and tomatoes on their bread instead of butter or margarine.

It is typical to use stale bread to make your pan con tomate so that the olive oil and tomato juice absorb into the crispy bread. When it is eaten along with grilled dishes, the bread is often toasted.

Instead of using it as a side dish, you can also add virtually any topping and convert it into a full-blown tapa to enjoy all by itself during the aperitivo for example.

In some regions, it is also common to eat it as breakfast, sometimes adding a slice of ham or cheese on top of the bread, and eating that with a coffee, a hot chocolate or orange juice.

In Mallorca, they have Tomàtiga de Ramellet, that uses a specific variety of small vine ripe tomatoes, they have a more intense and sour taste.

Experts say there is an ideal way to make this recipe and put the ingredients on the bread. First, you begin by rubbing the garlic on the bread. Then you do the same with the tomato (you can also crush it on to the bread). After that, you add the salt and finally the olive oil.

How to prepare it

Here is our go-to recipe for the perfect pan con tomate for 2.

Keep reading our blog to learn more about traditional recipes from Spain and dive into our culture through food.

And don’t forget to pass by any of our three Socarrat locations to try our Pan con Tomate!