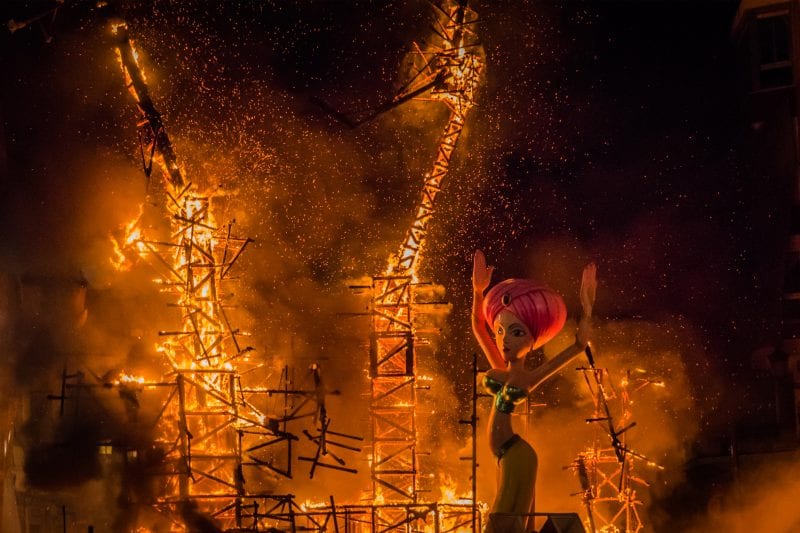 What’s the Las Fallas festival all about?

Every spring, for the first 3 weeks of March, Valencia’s streets bustle into action for the festival dedicated to Saint José (the patron saint of carpentry). The official festival itself is March 15-19, but Valencians like to keep the party going all month long. Street food, fireworks, and fire make this festival especially fun.

People have described the festival as a cross between 4th of July and a visit to Disney World or a Spanish version of Mardi Gras – it’s no wonder the festival draw tons of tourists and locals in alike!

There are a few theories, but the most popular origin story is that of carpenter tradition in Valencia, dating back to the Middle Ages. Back then, the carpenters had to hang planks of wood to support the candles, whose light they needed to work by in the winter months because the days were shorter. At the onset of the spring equinox, when the days finally would get longer, the carpenters would burn these pieces of wood to celebrate the end of dark days.

Eventually, the carpenters turned these planks of wood into figures by putting clothing on them and making them resemble whatever local personalities were popular at the time. These figures transformed into the “ninots” we see in the parades today.

Others believe that it was simply a form of welcoming the spring equinox with fire, a common tribal tradition that dates back to the BC era across all religions and regions. An additional speculation is that, as the carpenters started to light the things they no longer needed on fire, other people would stack their old belonging in the streets too, to burn away their excess from winter to welcome spring.

How was the festival established officially? The authorities realized that there was no way to stop this mass tradition, but they did need to make it safer for their city, so they established Saint Joseph’s Day and established specific areas within the city where the fires were allowed.

A Day at Las Fallas:

Every day, you’ll wake up at 8 AM (you really don’t have a choice) – these wake-up calls are named “La Despertas,” and they’re a very large alarm consisting of a musical parade, complete with firecrackers.

If you’ve got a sweet tooth, you’ll delight in the traditional churros with hot chocolate or the Las Fallas specialty, buñuelos. Think of buñuelos like Valencia’s version of beignets – you can’t go to the festival and not try them. They’re golden-brown fried pumpkin fritters served sprinkled with sugar, also great alone or paired with hot chocolate.

Does this idea of all this food have you feeling gluttonous? No worries – you’ll be walking all day. At 2PM, you’ll see and hear the Mascleta: the firework display fired off daily March 15-19 from the Town Hall Square (Playa del Ayuntamiento).

As you walk around, you’ll marvel at over 700 fallas – giant installations 20- to 30-feet tall made of wood and papier-mâché that are filled with firecrackers (for the night they are lit to explode), each accompanied with ninots – little puppets. The fallas will resemble political, celebrity, historical, and satirical figures. Each neighborhood commissions a crew to build at least 2 or 3, so there is a never-ending show of them! The best day to catch all of them is March 15th, as that’s the deadline to enter all the fallas into the Las Fallas judging contest.

As night comes, you’ll catch fireworks lighting off by the old riverbanks, now Turia Gardens – the best place to view these is fom the bridge of Pont de les Flors and Pont de l’Exposicio. March 18th is the grand finale – La Nit del Foc – when all the fallas are lit on fire.

La Nit del Foc is the culmination, the grandest fire of all – and it usually doesn’t start until 1 AM (don’t worry, an early one is held for the kids at 10PM). The fallas are razed to the ground with explosions and destroyed – all except for one (the one that won the judging contest).

What about the ninots? They’re lit up on la Crema – the night of March 19th.

Before night falls and the festival ends, though, you’ll want to catch L’Ofrena de Flors at the Plaza de la Virgen on March 17th and 18th to watch the costumed falleros and falleras make flower offerings to the Virgin Mary via a 45-foot Virgin Mary wooden statue.

Really, Las Fallas can be considered the festival of NO SLEEP, but the beautiful sites and fun atmosphere make the week worth it.