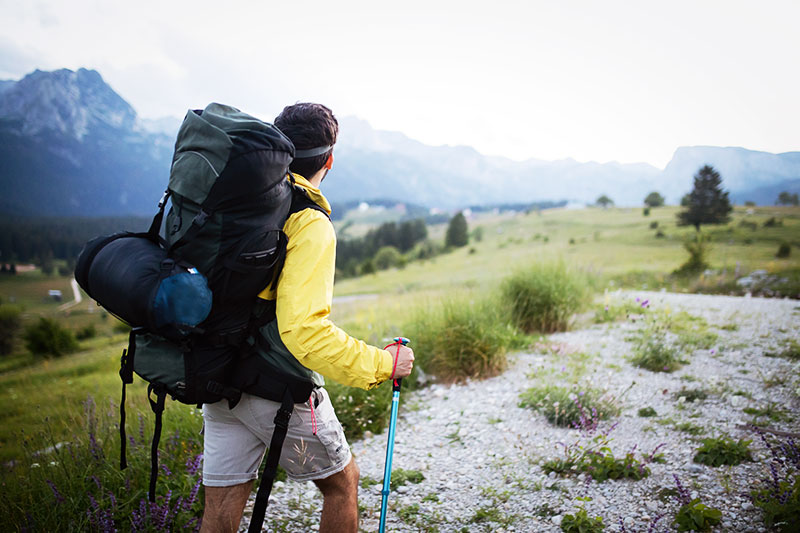 Strolling along the cobblestone streets of certain cities and towns in the north of Spain, it’s likely that you’ll come across travelers with walking sticks, hiking boots, and stuffed packs strapped on their shoulders. You might also notice a white scallop shell hanging from their bag, a symbol of their status as pilgrims walking the Camino de Santiago, or Saint James Way as it’s known in English.

The Camino de Santiago is a network of pilgrimage routes that has been traveled for centuries. Though there are multiple points of departure, the destination is the shrine where Saint James’ body is said to be laid. This shrine is located in Galicia, Spain’s northwest region, in the capital city of Santiago de Compostela.

There, in the historic center sits the Cathedral of Santiago de Compostela, a UNESCO World Heritage site that professedly houses the remains of Jesus’ apostle.

History of the Camino de Santiago

The tomb of Saint James is said to have been found in the year 820 A.D. by a hermit in the woods. King Alfonso II of Asturias ordered a church to be built there, which is where the present Cathedral of Santiago de Compostela now stands. In the year 842, the first pilgrimage was made by the same King Alfonso II who ordered the construction of the shrine. He, along with his court, walked just under 200 miles through mountainous regions on what is now known as the Primitive Way to become the first pilgrims of the Camino de Santiago.

As word spread of the shrine, more pilgrims began to travel the Camino. The Way reached its peak from the 11th to the 13th centuries. During this time, the Camino de Santiago became one of the most important Christian pilgrimage routes in the world. Hospitals and inns were constructed along the routes, taking in those on their way to visit the shrine in accordance with the Christian tenant of charity. Some of these hospitals along the Camino are still in use today.

In 1589, the remains of Saint James were hidden as a way to protect them from attacks by the English Royal Navy and were lost until their rediscovery at the end of the 19th century. The Camino de Santiago had few pilgrims until 1982 when Pope John Paul II spent 10 days walking the pilgrimage and again later in 1993 when it was accepted on the list of World Heritage Sites.

Since then, its popularity has been continually growing, and 2019 saw over 300,000 pilgrims walk the Camino to arrive in Santiago de Compostela. The enduring history of the Camino de Santiago makes it a 1,200-year-old route that is still celebrated today.

Today, travelers can choose from multiple routes to arrive at the Cathedral of Santiago de Compostela. The most common and internationally recognized route is by far the French Way or Camino Francés which begins in St Jean Pied de Port, France. The 490-mile route generally takes a little over a month to complete. Traversing the north of Spain, pilgrims explore the heights of the Pyrenees Mountains, the vineyards of La Rioja’s wine country, the high plateau of Castile and Leon, and the rolling green hills of Galicia.

Another well-known route is the Northern Way or Camino del Norte, which begins in Irún in the Basque Country and follows the northern coast of Spain to Santiago de Compostela. Throughout the 518 miles, pilgrims walk along sea-swept cliffs, past sandy beaches, and through coastal fishing villages. This route is known to be more difficult to walk than the French Way since there are larger elevation changes, however, many say the views are worth it.

The Camino de Santiago may be done walking, biking, or even on horseback. The route is split into different stages and each stage begins in one town or city and ends in another, generally about 15 miles apart. While some pilgrims decide to travel solo, others walk in pairs, and some travel the Camino in groups. The route may be attempted for spiritual reasons, though others go for sport or enjoyment. Most people begin walking early in the day and many spend their evenings exploring the cities and towns or getting to know fellow pilgrims.