Christmas brings out some of the most unique traditions throughout the world. Some are funny, others are wholesome, and then a few border on bizarre – but they are so fun to explore! If you haven’t heard of Catalonia’s Tió de Nadal Christmas tradition, then you are in for a treat (and probably a laugh).

“Tió” may mean uncle in Spanish, but this name is a bit misleading. The Tió de Nadal, or “Christmas Log” in Catalan, is a significant character during the Christmas season. The word ‘tio’ refers to a log or tree trunk in the context of Christmas.

However, tió also means ‘uncle’ in Castellano, a Spanish dialect, but it is also a colloquialism for dude, guy, or mate. So, unlike Uncle Christmas, Tió de Nadal signifies ‘Christmas log’ or ‘Christmas tree trunk.’

What is the Origin of Tió de Nadal?

The Tió de Nadal, or Christmas log, is a tradition in many Catalan houses and schools. It stems from a rustic, pagan practice that most likely began in the Middle Ages in the Pyrenees, though its exact origins are unknown.

During December, the log is traditionally placed in Spanish homes as children cover it in a blanket and offer it food & water. Every day, they discover that the food has vanished overnight, indicating that the log has devoured it. Then they hit it while singing a special song.

Tió was originally done on the winter solstice to signify rebirth as Spanish families burned the log and stored its ashes in the house for protection. Tiós are now commonly found in local Christmas markets, where they are sold as a cherished tradition to locals & photographed by tourists as a distinctive local peculiarity.

What Does Tió de Nadal Symbolize?

The Tió de Nadal has its roots in ancient rituals designed to promote abundance and family connection throughout the winter months. Tió’s trunk used to be burned in the fireplace after it had expelled all the gifts. This winter fire reflected the community and continuity of the family in the form of a ritual: it provided light and drew the unwelcomed elements away from the dwelling.

Initially, the trunk was lit and kept burning from Christmas Day to Three Wise Men Day and then it was hidden away as a protective charm around the home. It was also a custom to scatter the ashes for crops in stables & over the beds as a fertility ceremony. The Tió, like other winter rites centered on trees, pays respect to the land & its bounty. 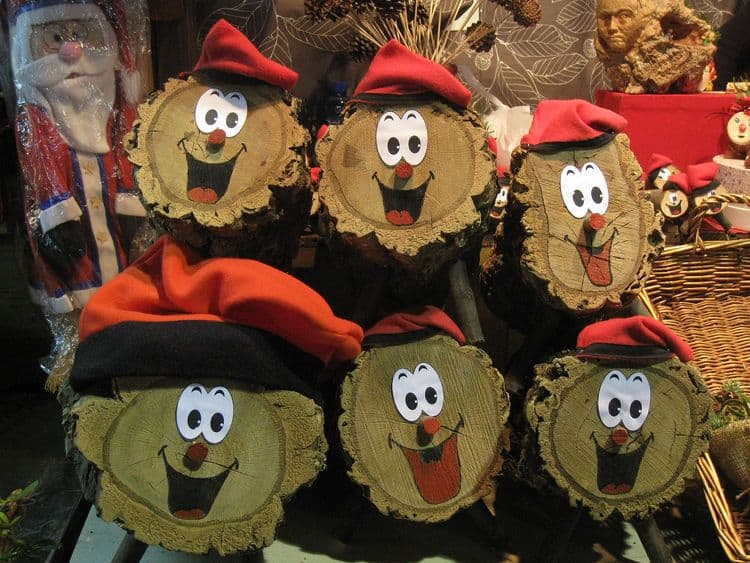 Originally, they would place the ‘pooping log’ near the fire, but this is no longer the case due to the scarcity of fireplaces in modern homes. They then torched the log and scattered the ashes across the fields.

On the other hand, parents nowadays preserve the log for the following year. Furthermore, Caga Tió was once nothing more than a dead log. Nowadays, a face is painted and made to resemble a real person.

What Do Children Do to the Tió de Nadal?

Children take care of the log by feeding it sweets, candies, nuts & other foods from December 8th until Christmas Eve. To feed Caga Tió, children leave food in front of the log at night & when they wake up the following day, the food has magically vanished, leaving the log to grow over the next few days. Then, parents hide the food & replace the ‘poop log’ with larger equivalents.

To keep the log warm, the kids will wrap it with a blanket. The better the kids treat the log, the bigger the rewards! However, on Christmas Day, children command it to defecate. They accomplish this by striking it with a stick while singing the Caga Tió song.

Beating Tió de Nadal while singing one of its traditional songs is how children get the log to “poop” out presents. Typically, the parents hide the presents under the log with a blanket. Then when children hit the log, parents raise the blanket & a gift is given to the children. There are many unique versions of the song, including the two most common ones highlighted below.

Sign up and receive news & updates on all things Socarrat! Flamenco Night updates and much more.

(Sok-uh-raht) n. Refers to the “seductive caramelization of the bottom layer of a perfect paella when the liquid is absorbed and the rice is done”