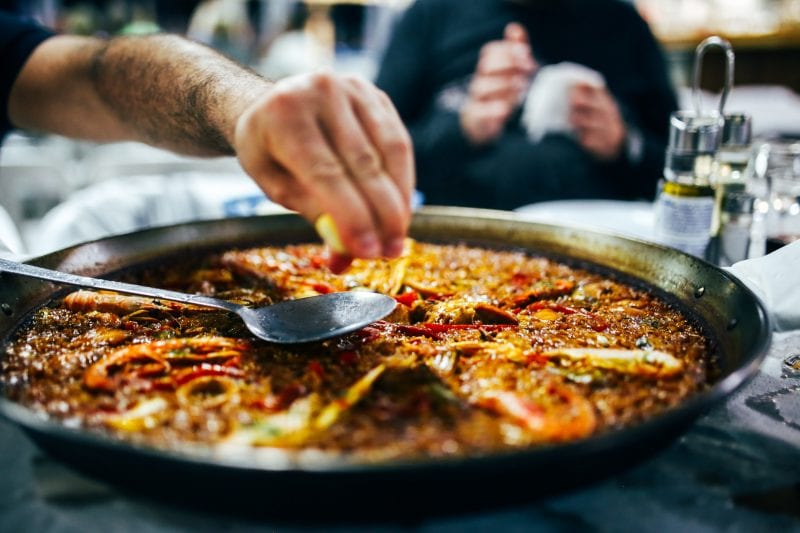 Paella is one of the most widely enjoyed, and perhaps fiercely debated, traditional Spanish dishes in food culture – akin to the debate of thin versus thin crust pizza. We know one thing’s for sure – just like pizza, it’s delicious no matter what way it’s made.

Paella is a rice, vegetable, and meat/poultry/seafood dish that has been likened to the Cajun dish jambalaya, due to its fusion of ingredients from multiple regions and cultures throughout the years. It’s a rice-based dish that varies by ingredient wherever you go – as some people (or restaurants) serve it heavy on the meat, others heavy on seafood, and others a mix of both. Paella has grown from being a “peasant” food centuries ago to a communal sign of celebration – whether it’s at a restaurant with family and friends, or in the streets during festivals in Spain.

Paella today originates from centuries of Valencian tradition: The Moors brought rice to Spain in the 8th century when they entered through the Iberian Peninsula. With rice, The Moors also brought intricate irrigation systems (which they had established out of necessity in their very dry, hot homelands) that helped turn the Valencian countryside into a bountiful land for crop growth (including, of course, the rice they brought with them).

The Moors would hold lavish banquets that day laborers and servants would take leftovers home from, mixing with anything available for their families back on their farms – it became the people’s food.

The word’s origin itself has varied origins: some say the name comes from the Arab (Moorish) word “baqiyah” for leftovers; others say it comes from the Latin word “patella” for flat pan (that it’s cooked in) – since the dish seems to be all about syncretism of cultures, we like to think the name is, too.

One thing anyone and everyone can agree on is the way that paella is prepared: in a paella over an open flame. Yes, the dish itself carries the same name as the pan it’s cooked in. In Spanish and Valencian towns, you’ll often see giant paellas cooked outdoors on Sundays for families to enjoy, and in restaurants they may have the paella cooking over a large gas stove. Either way, the key to the delicious union of flavors cooked just right is linked directly to the pan and even heat provided by open fire.

Paella’s ingredients are what scream in distinction, as there are literally hundreds of regional variations – but the basic building blocks are the same:

Some paella lovers are sticklers for the ingredients and preparation method, but at Socarrat, we believe that paella’s true authenticity is in the community it builds – so come on in and enjoy a dish of paella with your friends and family paired with a bottle of Spanish wine.