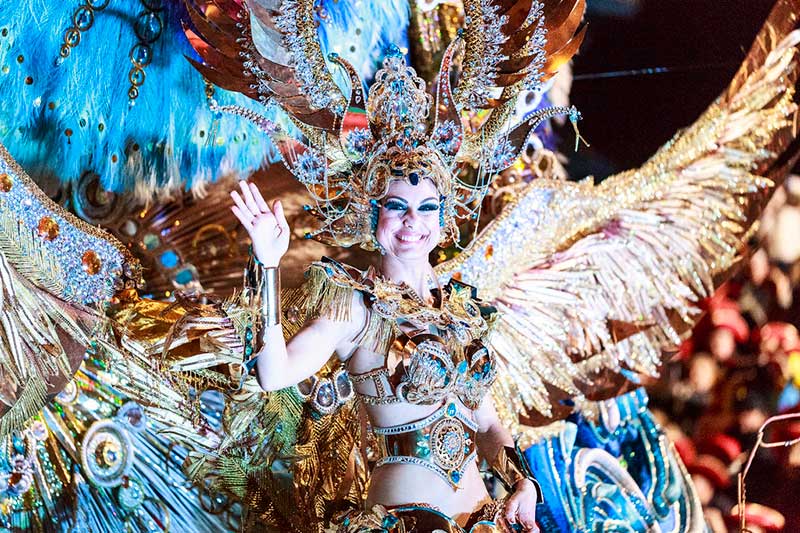 Spain loves to celebrate carnival just before Lent begins as much as it is celebrated in New Orleans or Rio de Janeiro. Carnival in Spain, called carnaval in Spanish, is a serious thing and it is celebrated flamboyantly! Dictated by the Catholic calendar, the carnival season lasts for up to two weeks, usually in late February or early March.

The carnival word itself represents the preparation for Lent, as it could be loosely translated from Latin as “Let go of meat”. The carnival celebrations in Spain date back centuries, as far back as the Middle Ages. Unfortunately, they were banned for 40 years, starting in 1938, during the Franco dictatorship. But since their revival, Spaniards are willing to celebrate now more than ever!

Spain is a culturally rich country with local and regional traditions, and carnival is no exception to that. Carnival celebrations vary depending on which region in Spain you choose to visit.

You can go just about anywhere in Spain during the carnival season and have a great time. We could write books on various carnivals and their specificities. However, we will focus on three major destinations for carnival in Spain: Tenerife, Cadiz, and Sitges to highlight their differences.

Although each carnival is distinctive and has its own traditions, they almost all begin with a speech given by a local representative or celebrity. And most carnivals end with some variation of the “burial of the sardine”, during which a large effigy of a sardine is either burned or buried. It represents the end of the festivities. Today, however, most people just like to enjoy the party and keep that festive tradition part of the culture, even if they do not really respect the religious privation anymore.

Santa Cruz de Tenerife (capital of the Canary Islands) carnival is similar to the well known Rio carnival. Maybe it is due to the tropical nature of the islands or because it is mostly celebrated on the beach.

It is probably the biggest party in Europe with hundreds of thousands of people participating in the two weeks of intense celebrations, during which no one seems to have time to sleep. In all its revelry it is full of fun, music, brilliant colors costumes, street parties and parades, something to stimulate all your senses.

It is a common tradition in Tenerife for people to dress up as the opposite sex, men wear makeup and dresses while partying in the street. There is also a large beauty pageant where the women wear very elaborate dresses, so elaborate in fact that the weight of the dress, which can reach 450 lb, has to be supported by a structure with wheels.

Cadiz is all about music

Cadiz, a city in southern continental Spain, has a whole different vibe. They do celebrate carnival a lot too, but it is more centered around music and humor. People wear troubadour’s costumes and head outside to perform on the sidewalk.

The songs performed are satirical and mocking celebrities from all walks of life, but mostly politicians, of course. The humor used in the songs is their way of liberating their frustrations and enjoying themselves.

The beauty pageant is replaced by a talent show, and while walking down the streets singing and mocking celebrities, they often dress the part. Cadiz is all about music, humor, and wit.

Sitges, the place for adults

Located southwest from Barcelona, Sitges offers another kind of carnival celebration, with a much more adult, as opposed to familial, ambiance due to the heavy participation of the LGBTQ community.

You can view it as a week-long pride celebration merged with a huge street party, in which everyone is invited to have fun. Public street events do not stop, nor do the extravagant costumes and floats parades.

In Stiges another form of talent show is held … a drag queen talent show. Drag events are at every corner, encouraging the party to never stop.

Come celebrate at our restaurants

It may not be summer in the city yet but at Socarrat it is never too early to party like it is. Throw on your brightest outfit and gather your friends for pitchers of sangria and tapas that will make you feel like you are celebrating in Spain!