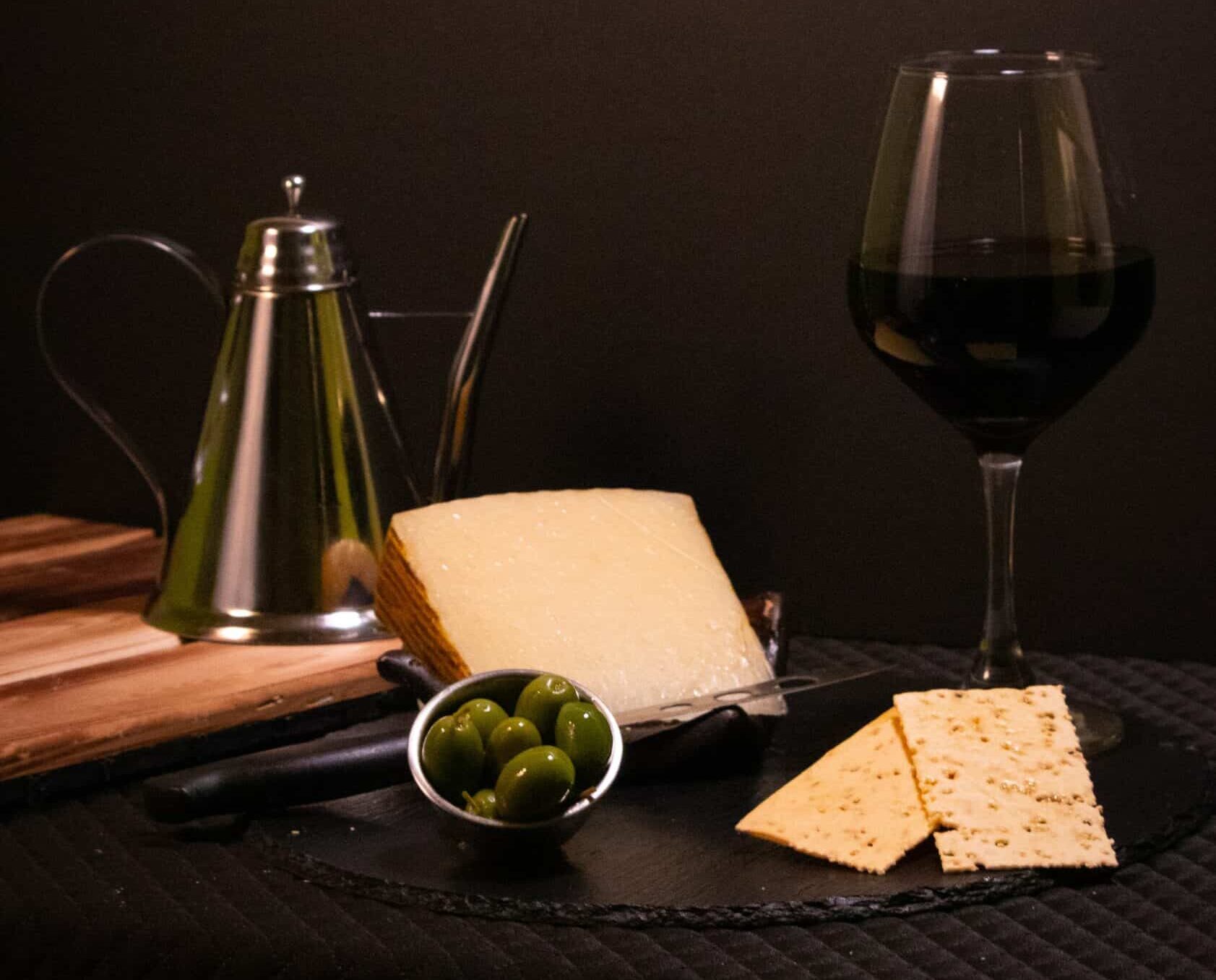 The tradition of cheese making in La Mancha dates back to the Bronze Age. Yet this region is famous for more than cheese. Miguel de Cervantes wrote the famous “Don Quijote de La Mancha,” the second most-translated book globally, bringing fame to the region during the 17th century. Toledo, Cuenca, Ciudad Real, and Albacete are the provinces that produce Manchego cheese within the region.

Authentic Manchego is a regional product protected by the European Union. Whenever it’s made somewhere else, such as in Mexico or the United States, it’s called Manchego-type cheese or Manchego-style cheese. What makes Manchego cheese different? Let’s find out below.

What is Manchego Cheese Made From?

The provinces mentioned above are in high central plateaus, creating the ideal climatic conditions for raising sheep. Manchega sheep breed produces the milk that makes Manchego cheese. The cheese is a distinctly Spanish creation, thanks to its basket weave pattern. Spanish cheesemakers rolled curds into grass baskets in original cheese making, leaving a distinctive pattern on the firm rind.

Today, they recreate this pattern on the rounded interiors of molds. This cheese will delight your palate. It is firm, slightly buttery, with an opening texture. A nutty flavor characterizes this cheese, but it is not overpowering, and it has an aftertaste that is characteristic of cheese from sheep’s milk. Its color varies from white to ivory with some yellow flecks, depending on its age.

The taste grows stronger with age, beginning with a mellow, mild flavor, and becoming zesty as it ages. For example;

Most times, industrial creameries are within easy walking distance from pastures, so transport time is virtually non-existent. Cooled milk flows into heated vats as the cheesemakers add rennet and culture to it. The milk produces curd that is then cut and separated to drain excess whey. After draining, they then place the broken curd into molds.

Traditionally, artisanal cheese was molded in grass-woven molds, but industrial Spanish cheese uses plastic molds. The cheese will go into aging once it has soaked in brine—salt and water solution— for an extended period. Besides adding rich, salty flavor to the cheese, brining controls unfriendly bacteria growth on the rind. Rubbing olive oil on the cheese allows it to age while still keeping moisture and flavor. Unlike most cheeses, Spanish cheesemakers make Manchego from raw sheep’s milk.

The natural ingredients don’t contain any fillers or preservatives, making them gluten-free. Most Manchego cheese uses animal rennet, so vegetarians may not enjoy it.

What Does ‘PDO’ Mean & How Did Manchego Earn It?

Manchego cheese has existed in the La Mancha region for hundreds of years. However, PDO—Protected Designation of Origin status— was granted in 1984. Manchego is a cheese that satisfies the following conditions, defined by the EU PDO regulations:

Manchego cheese has a number on its rind, which confirms they produced it according to traditional methods.

Ideally, refrigerate Manchego cheese in parchment paper. But you can also put Manchego pieces in a jar with extra virgin olive oil for preserving. Or put waxed paper over the jar and refrigerate. Finally, you can freeze Manchego, although it will have a slightly grainy texture when you defrost it (defrost it in the fridge). Then cut into wedges or slices after removing the rind and enjoy one suggestion above.

Try the Manchego cheese now. You are in for a delicious treat. It’s OK if you can’t have enough of this classic and healthy Mancha cheese.

Sign up to receive news & updates on all things Socarrat! Receive a monthly newsletter featuring our 90 Second Paella of the Month, Flamenco Night updates and so much more.

(sok-uh-raht) n. refers to the “seductive caramelization of the bottom layer of a perfect paella when the liquid is absorbed and the rice is done.”