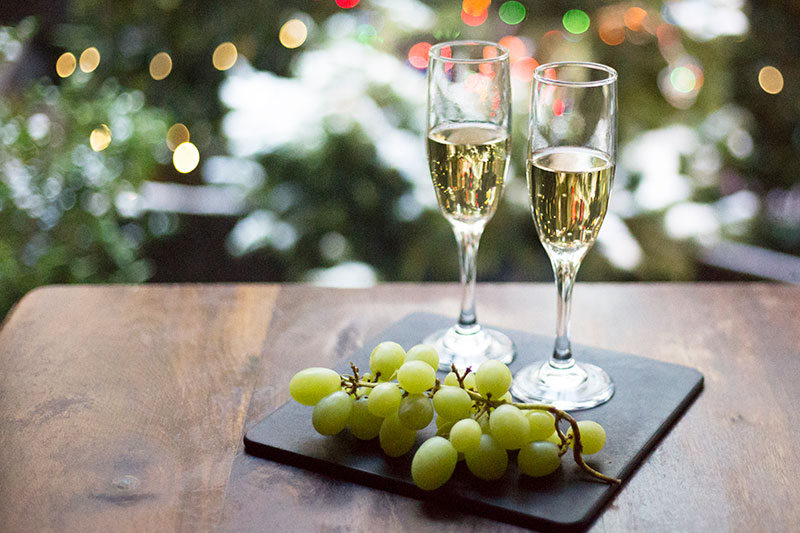 December 31st is a day of celebration across the world in which each country celebrates in its own way. In Spain, friends, and family gather in the evening to enjoy a long dinner with special dishes and good Spanish wines. Here are a few of our New Year’s traditions.

As the clock is close to midnight, everyone gathers around the TV to watch the 12 chimes of the bells at the time they eat their 12 uvas de la suerte (lucky grapes). The 12 lucky grapes are meant to bring you luck for the next 12 months of the year.

This old tradition marks the end of one year and the beginning of the next with the hope that it will be better and happier than the previous one.

There are different theories about the origin of this tradition, one of them states it was originated in 1909 due to a bumper crop of white grapes in Alicante, where the vine-growers sold them as lucky grapes to get rid of their surplus.

However, according to old newspaper articles from the 1880s, Spanish high-class families, imitating the French, used to celebrate the new year with grapes and champagne. Shortly after, a working-class group of madrileños (people from Madrid) decided to ridicule this snobby tradition and gather at the Puerta del Sol in front of the Royal Post Office clock to eat their grapes and sip their cava.

Thousands of people gather every year at the Puerta del Sol in Madrid, similar to Times Square in New York, to eat their grapes there and to celebrate the arrival of the new year, transforming the square into a huge shared party. The chiming of the clock is broadcast on TV all over Spain.

Finally, a food tradition in Spain is to have churros on the morning of January 1st, to start the new year. Nothing like churros with a hot chocolate to fill you with warmth for the year to come.

Another major difference is the importance of Epiphany. In America, January 6th is not really a major holiday anymore, it mostly marks the end of the holidays and the return to the regular work routine. In Latin America, it is still a relatively important celebration, especially in Mexico, but nothing compared to Spain.

Epiphany is the conclusion of the year-end celebrations. This Spanish celebration has a prelude that begins around December 30th when Santa Claus is replaced in many stores and shopping malls by Los Reyes Magos (The Wise Men) or the Cartero Real (Royal Mailman) who will receive letters from children to deliver them to the Wise Men.

On January 5th, colorful parades of the Wise Men take place throughout Spain, announcing their passage in homes the following night. The parade taking place in Madrid is broadcasted on television for everyone to see.

To prepare for the Wise Men each family member puts one shoe next to some food and drinks for the Wise Men and their camels to snack on during their long journey. Once night falls, the Wise men visit the houses to leave their presents and a few candies next to each person’s shoe. If the person has not been good they will leave some coal.

On January 6th, the families open their presents and eat Roscón de Reyes (king’s cake), a large round pastry in the shape of O, in which a little item is hidden. The tradition in Spain was to use a seed or even a coin, but nowadays it is a little figurine and/or a bean.

Historically, whoever finds the bean was elected the king of the day, or at least of the celebration. These days, the tradition has turned into a form of malediction, because the person who finds the bean has to pay for the cake.

Check out the New Year’s Eve menu here and join us to celebrate the new year the Spanish way.