Most famous food in Valencia 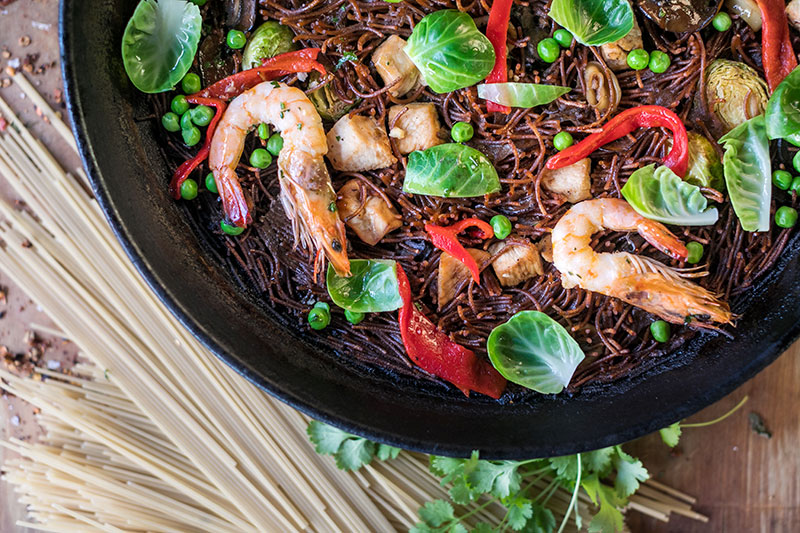 The Fallas de Valencia is a traditional fire festival and the most flamboyant celebration of Spain. Throughout the festival, there are citywide pyrotechnic displays starting at the beginning of March, although most of them occur from March 15 to 19.

The daily mascletà is a loud, explosive barrage of coordinated firecrackers, and the cremà, on the final epic night, is when the fallas (giant wood and papier-mâché sculptures) are burnt in massive bonfires. Learn more about this fire festival in this other post.

Like in any other Spanish celebration, food is a big part of the Fallas celebration and Valencia has one of the richest traditional Spanish cuisines because their people, just like the rest of Spain, love food. Therefore, we will take the opportunity to talk about the best and most typical Valencian dishes that you can enjoy during this famous fire festival.

We cannot talk about Valencian food without talking about paella since paella was born in this region before conquering the rest of Spain, and the rest of the world!

The most traditional version is the Paella Valenciana (Valencian paella), made with rice, chicken, rabbit, lima beans, green beans, tomatoes, and saffron. To give it their own flair, people add regional products that could include peppers, snails, duck, pork ribs and more, making unique paellas all over Valencia. During the Fallas, there are huge paellas being served in the street among the festivities.

The fideuá is a paella dish made out of pasta instead of rice in the shape of short and thin noodles. Just like the paella, it can be made with virtually anything, and each town and family has its own beloved recipe. However, the most popular variety and the most common one found during the Fallas is the seafood fideuá. It is made with stir-fried seafood and lots of fish broth.

All i pebre (garlic and pepper) is one of Valencia’s most common dishes but not so famous outside the region. It is a sauce/broth that is made with garlic and peppers to accompany fish dishes. It can be served as a sauce to accompany your fish but it is mostly used as a fish soup base in which any fish can be put in.

However, the most popular one is with eels and potatoes. The all i pebre eel dish is usually eaten with bread to soak up all the broth.

Buñuelos are fresh round holed beignets and the most common variety you will encounter in Valencia, especially during the Fallas, is the calabaza one, which dough is made of pumpkin and orange zest.

These pumpkin beignets are eaten for breakfast, as a dessert or as a snack throughout the day. While most people would dip them into café au lait or hot chocolate, people of Valencia prefer to dunk them into refreshing horchata (see below). Nothing better than something sweet to end a meal of delicious dishes.

Another sweet treat is the fartons which are long fluffy cakes made with sunflower oil. They were created in the ’60s by the Polo family from the town of Alboraya, in the northeast of Valencia. These cakes were designed to be dunked deep in horchata because their elongated shape could reach the bottom of the glass.

In the Valencian area, the go-to drink is the horchata de chufa. That traditional Spanish drink is made out of tiger nuts (and not of rice like its Mexican counterpart) to which cinnamon or lemon zest can be added.

Although it can be served hot, most people prefer it cold, for dipping buñuelos and fartons. The Valencian horchata can be traced back to the 13th century originating in Alboraya, the same place where fartons were created.

Join us for dinner at Socarrat from March 19 – 22 while we celebrate Las Fallas with our new flaming paella!