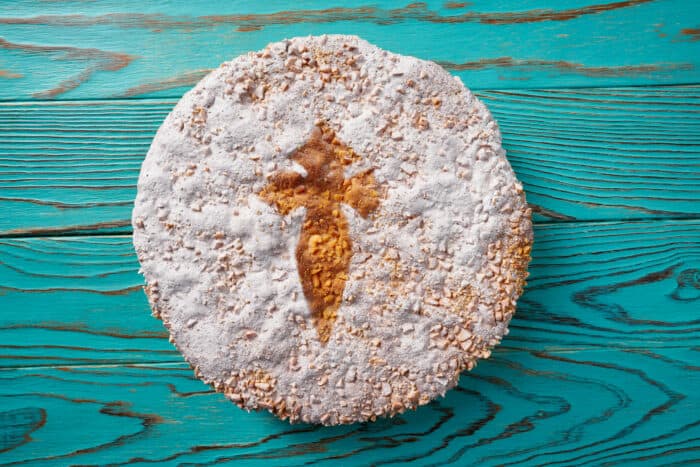 Read below to find out how Tarta de Santiago has stood the test of time and become one of the hallmarks of Spanish cuisine.

What is a Tarta de Santiago?

While it gets most of its flavor from the ground almonds, Tarta de Santiago is also flavored with lemon and orange zest to brighten up the flavor profile. The finishing touch that goes on Tarta de Santiago is a dusting of powdered sugar stenciled out in the form of a cross. We’ll discuss the meaning of this emblem later on.

Tarta de Santiago is served chilled or at room temperature, and as it’s made mostly from almonds, it also happens to be gluten-free. As it does not include any flour or aeration, the cake is typically very dense, making it a great accompaniment to a piping hot cup of coffee or hot chocolate.

Although minimal and straightforward in ingredients, the cake is packed with flavor, not to mention history, that will transport you through time to the dessert’s origins.

Does it really have origins from the Middle Ages?

Although the trek has many starting points, the Camino de Santiago hikers all congregate in Galicia at the Cathedral of Santiago de Compostela to pay their respects to Saint James, whose remains reportedly rest within the cathedral.

What is the symbol that usually adorns the Tarta de Santiago?

One of the most distinguishing elements of Tarta de Santiago is the symbol it bears on its surface. Almost every Tarta de Santiago you see nowadays displays an emblem of the Cross of Saint James outlined in powdered sugar. The cross originally served as a symbol for the Order of Santiago, a 12th century religious and military order.

To understand why this symbol is so important, we first need to understand who Saint James is. There’s no shortage of saints named James in the world, but the one associated with Tarta de Santiago is the very same that was among Jesus’s twelve apostles. Brother to the disciple John, Saint James was the first of the apostles killed for his faith.

The Cross of Saint James, identifiable by its sword and fleur-de-lis design, represents Saint James’s martyrdom and beheading by sword. Nowadays, the symbol is also a reminder of God’s protection over the Galician people.

Although it’s now rare to come across a Tarta de Santiago absent of the Cross of Saint James symbol, this tradition didn’t actually begin until 1924, many centuries after Saint James’s lifetime.

Tarta de Santiago is served up throughout the year, but it’s most commonly eaten in July. Tourists and locals flock to cafes and restaurants to indulge in the dessert on July 25th, the apostle Saint James’ name day.

The cake is so integral to Spanish culture that it was awarded a Protected Geographical Indication in 2006. This title means that government regulations now dictate where and how the cake must be made to be considered authentic, much the same way whiskies like bourbon or scotch & manchego cheese are regulated.

Tarta de Santiago is a must-try for anyone interested in Spanish cuisine. If you can’t make it out to Spain for the Camino de Santiago, come down to Socarrat instead to discover what this long-standing tradition is all about!

Sign up to receive news & updates on all things Socarrat! Receive a monthly newsletter featuring our 90 Second Paella of the Month, Flamenco Night updates and so much more.

(sok-uh-raht) n. refers to the “seductive caramelization of the bottom layer of a perfect paella when the liquid is absorbed and the rice is done.”