Everything you need to know about Spanish Sangria 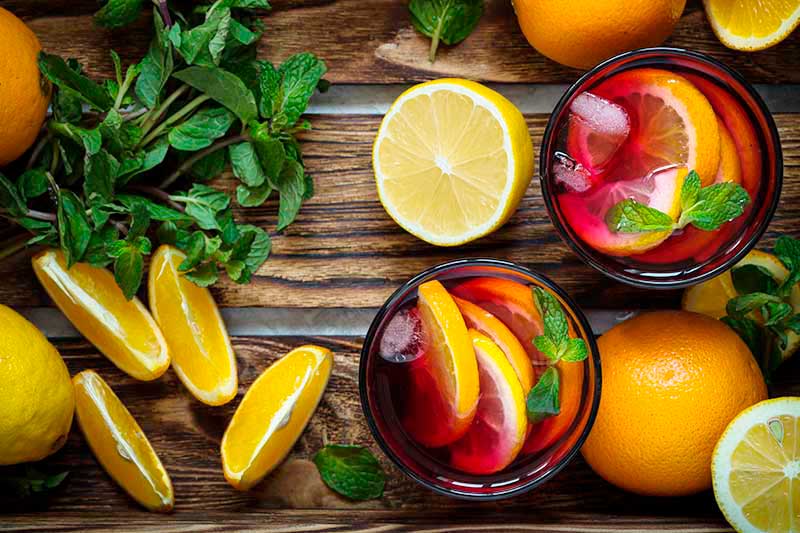 Even if you’ve never been to Spain, there’s a good chance that you’ve heard of sangria, one of the country’s most popular drinks. But what is sangria exactly? Traditionally, Spanish red wine is mixed with fruit (most often oranges and peaches), spices and others stronger spirits to make a sweet, refreshing drink. Add ice to it, and you’ve got the perfect recipe for a hot summer day.

Since sangria is so versatile, there is no single recipe for the drink, but rather infinite variations. This means that as long as you follow a loose set of ingredients and steps, you can make sangria just the way you like it; you can use orange juice or maybe you prefer the orange slices; you can add spirits or leave them out; you can choose which fruits go in—you get to decide the recipe! Today, there are even recipes that add Coca-Cola or Fanta to the wine.

While no one knows the exact origins of sangria, there are many speculations and ideas of where the red drink comes from. One theory suggests that its roots go back to the first century when Romans are said to have planted vineyards throughout the Iberian Peninsula. Supposedly, they developed a taste for Spanish reds and used the wine to make their sweet punches.

Another theory, which many believe to be the most credible, is that sangria was invented in the 19th century in Andalusia, a region in the south of Spain. The story goes that some field workers had red wine, and since Andalusia is not a wine-producing region, the red that they had was of very poor quality. To improve the taste, they added fruits, sugar, spirits, and spices. To their delight, they found that their recipe was delicious, and they continued to make and share it until it became well-known.

A final idea suggests that a sangria recipe was first created for the Spanish booth at the 1964 World Fair in New York. Though we know that the drink was enjoyed in Europe much earlier than the ‘60s, this is generally recognized as the catalyst for sangria’s popularity in the United States.

When and where to drink sangria

Since sangria is such a refreshing drink, it is often enjoyed during warm summer months throughout the south of Spain, especially along the Mediterranean coast where the sometimes-sweltering heat can be combated with a cool, fruity red drink.

On a hot day, you can sit down on the patio of a restaurant in any Spanish Mediterranean beach town and find sangria on the menu. It’s usually brought to your table in a glass pitcher with enough to serve four people, though you can also ask for a single glass. Though traditionally sangria is a southern drink, its popularity among tourists makes it easy to find almost anywhere in the country.

Throughout the rest of Spain, there are different sangria recipes according to what is most typically available. In Asturias, a region in the north that is known for its ciders, they make cider sangria or sangría de sidra. In Catalonia where the production of cava (a sparkling white wine) is important, sangria de cava can be found.

Recipes very similar to traditional sangria recipe can also be found in other regions of the country. The drinks go by different names such as zurra, zurracapote, and limonada de vino.

How to prepare sangria

Even though there’s a multitude of sangria recipes out there, we love a classic take on the drink. Here’s our favorite recipe for a traditional Spanish sangria.

Taste our different sangria recipes at any of our three Socarrat locations and decide which is your favorite. And remember to keep reading our blog to learn more about Spanish culture and to find more great recipes that bring Spanish flavor to you.