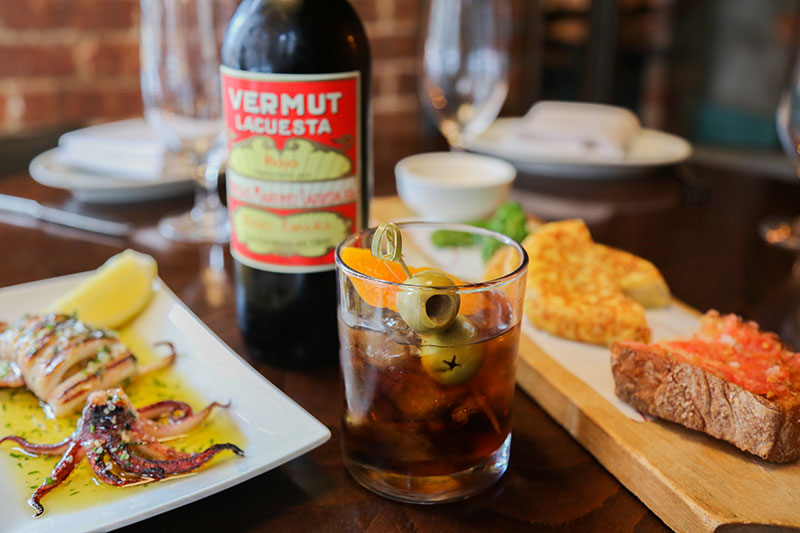 In Spanish, vermouth has the name of vermú or vermut and it is the perfect match to go with various tapas. Due to the huge popularity of the drink in Spain, the name is ingrained in the culture and people referred to the aperitivo as “La hora del vermú” meaning the time for vermouth.

Traditionally, during la hora del vermú or the aperitivo, the idea was to drink a glass of vermouth paired with a good tapa to open up the appetite before lunch. Not very surprising, since Spaniards love to mix food and drinks. However, most of the Spaniards drink beer or wine now, although vermouth is trending again in Madrid. Nowadays you can drink vermouth whenever you feel like, no matter what time it is.

In Spain, the vermouth is usually served neat, chilled and with ice. It usually comes with a slice of orange or of lemon, plus an olive. Some like to pour sifón (club soda) in it to open up the flavors and make this drink even more refreshing, while others mix it with Coca-Cola, ginger ale or white wine.

As we saw in the post about the aperitivo, the tradition of drinking something to “open the appetite” dates back to the era of Hippocrates, some 400 years B.C. It has evolved with time, of course.

The modern drink originated about three hundred years ago is an aromatic and fortified wine with the addition of herbs and plants. When it began, it contained wormwood, also known as absinthe, a plant having the reputation to treat stomach disorders and intestinal parasites.

That plant grew mostly in Germany, and the German word for wormwood is wermut. The name vermouth we know today comes from the French pronunciation of the word, that was then translated to English. Italy and France are the biggest producers of vermouth in the world, but Spain also produces some vermouth.

The town of Reus, southwest from Barcelona, is considered the mecca of vermouth for Spain, as it is where it was first made and was the location of dozens of brands. Vermouth was introduced in Spain by Italians, during the 19th century, shortly after it was created. Since then it has developed a whole new life and personality in Spain.

Commercial vermouth is produced in many regions of the country and many bars, cafes or restaurants have their own recipe of that famous drink they serve by the bottle or directly from the barrel.

There are sweet vermouth wines, which contain 10% to 15% of sugar, while the dry ones rarely exceed 4%.

Most people are familiar with white vermouth, but there are also other colors. Red vermouth gets its color either by using red grapes, adding red wine into the mix or simply by using dry ingredients (spices or barks for example) that will change the color. Rose vermouth will usually start with a mixed base of white and red wines. There’s also a much more limited golden shade.

While regular wines have a concentration from 9% to 14% of alcohol, vermouth, a fortified wine, is usually around 16% to 18% of alcohol. You can use vermouth for cooking, in substitution of white wine, but remember it has an extra dose of alcohol and it’s also stronger. However, it’s a prime choice for marinades and sauces.

Perfect tapas for your vermouth

Normally, to accompany your glass of vermouth people in Spain eat a couple of tapas, which stimulates the appetite for a large meal to come. Since the vermouth is a strong wine, it complements salty tapas and any other food with a strong personality, like seafood or Spanish charcuterie boards.

You will obviously find Spanish vermouth at Socarrat Paella Bar, an artisanal product coming from La Rioja (northern Spain), and to go along with it, we suggest any one of our tapas.

The Spanish tortilla and charcuterie boards are also a good choice to go with this fortified wine, you can get some Serrano or Ibérico ham, or if you would like to diversify the tastes, you have the campero board, which includes Serrano ham, chorizo Ibérico, and Manchego cheese.

Now that you have learned more about our Spanish vermouth tradition we hope you’ll join us for la hora del vermú!