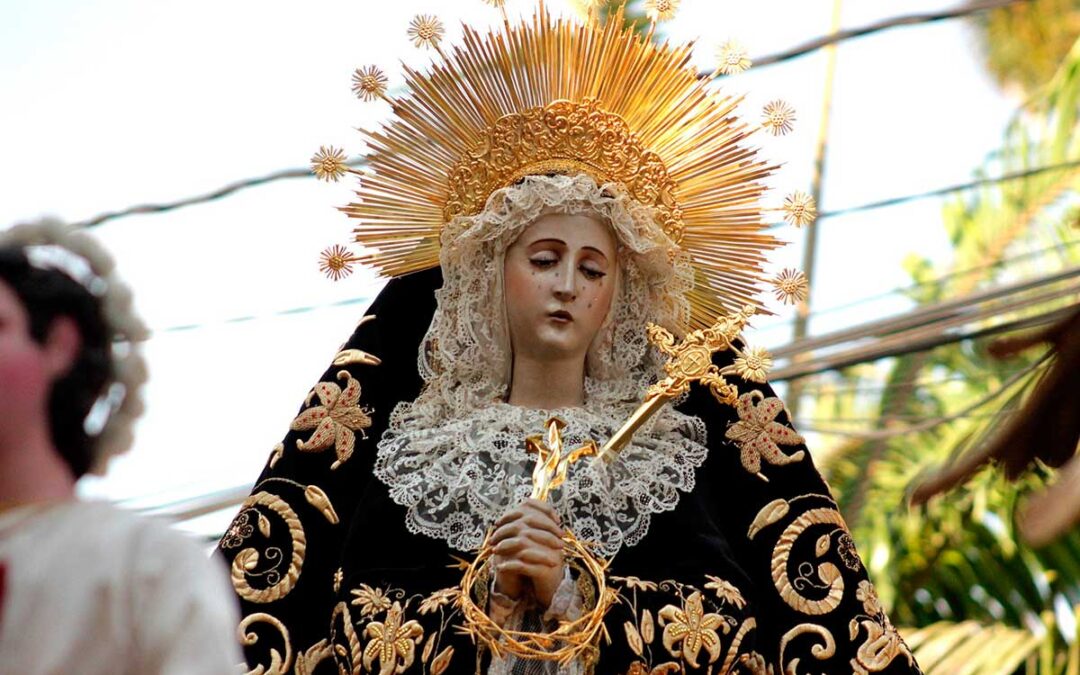 Every spring throughout the entire country of Spain, Spanish citizens celebrate Semana Santa, a week-long festival culminating on either Easter Sunday or Easter Monday. The holiday, known as Holy Week or sometimes Easter Week in English, is filled with processions, floats, music and reverence, and no matter which corner of Spain you find yourself in, the holiday traditions are something to behold.

Generally, the processions are filled with pasos, ornate floats which depict religious scenes that are generally owned and cared for by religious brotherhoods, called cofradías. The cofradías have a strong significance in the Easter tradition and the members are typically the ones who carry the floats. In some places, the floats weigh thousands of pounds and hundreds of costaleros are needed to bear the weight. Those in the brotherhoods who do not carry the pasos walk or march as penitentes or nazareños, people who are doing penance. Their costumes may be jarring to Americans, as they wear robes and their heads are covered by conical hoods almost identical to the KKK attire. However, this ancient tradition isn’t related at all with the criminal organization, but comes from medieval ages and is carried on today. Women may also participate in the processions, normally covered in a mantilla, a lace headscarf, following the float depicting the Virgin Mary. 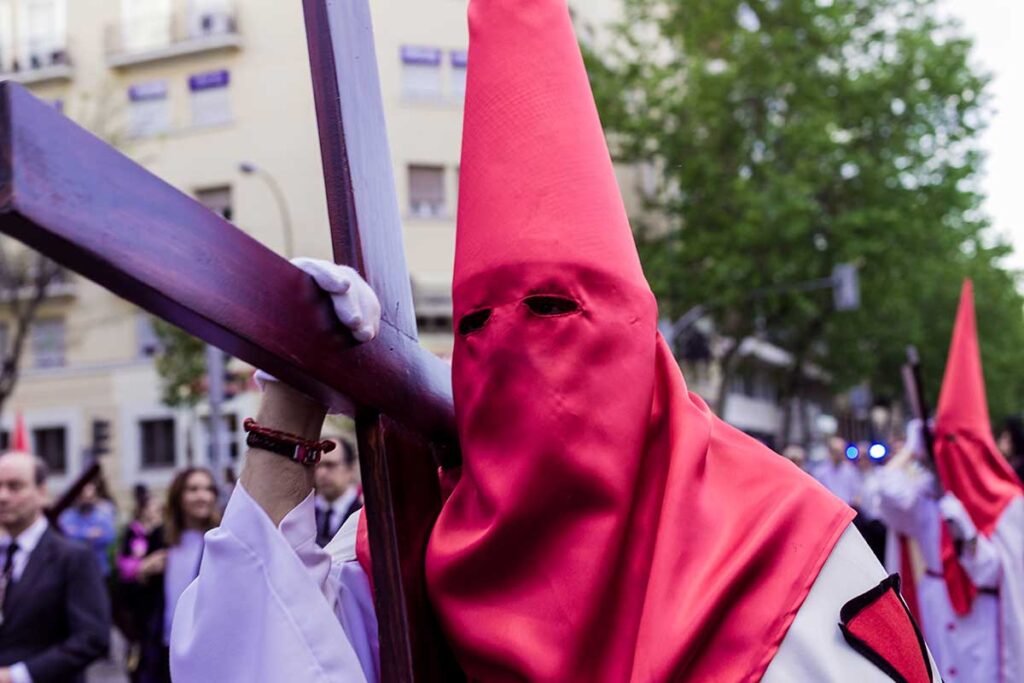 While Semana Santa is a religious festival celebrated throughout the whole of Spain, traditions vary far and wide depending on the region. Andalusia is typically recognized as the area with the biggest and most impressive festivities. In the south, the holiday takes on a celebratory quality, with flamenco music and festivities, and in the north, Semana Santa is known for more somber traditions.

The city of Seville holds arguable the biggest and most extravagant events in all of Spain. International tourists and Spanish people alike travel from all over to experience Easter week in the city. Each day of the holiday is filled with elaborate processions that span miles and travel along charted routes throughout the city’s neighborhoods. There are over fifty cofradías and each brotherhood carries two floats. Seville´s floats are some of the most elaborate in Spain and some have been carried in the Semana Santa processions for centuries. For the largest floats, rows of costaleros are lined up underneath the pasos, carrying them on their shoulders and necks, and walk for miles during the procession. It is a huge honor to be chosen as a costalero, and months are spent practicing in preparation of the holiday.

Malaga is also known for its Holy Week celebrations. Like in Seville, some of Malaga’s floats, or tronos, are hundreds of years old. These intricate thrones are regarded as works of art, as some have even been made by famous Spanish artists. Some of these tronos weigh over 10,000 pounds and must be carried by over 250 men. They are so big that they do not fit in the churches and are housed at different locations. 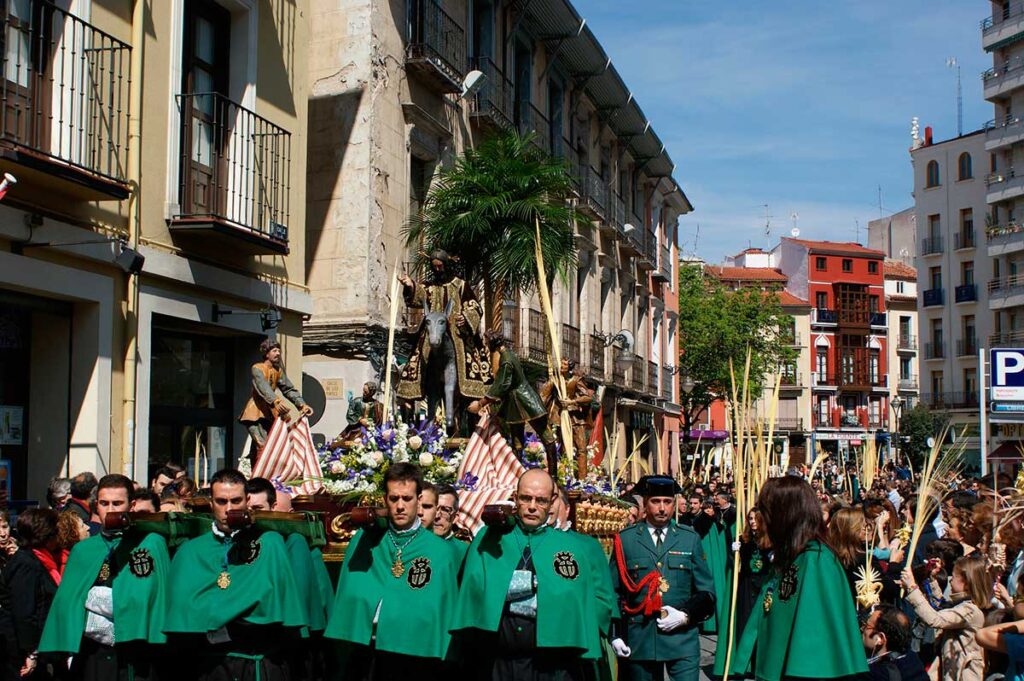 While Zamora’s Semana Santa processions may be more somber than those of Spain’s southern regions, their celebrations are the oldest in the country. The first processions here were recorded in 1179, making this Spanish town’s traditions almost 850 years old. Here, they recall medieval festivities by wearing monk’s robes instead of the traditional penitente robes and carrying torches instead of candles.

Not only are the streets filled during Semana Santa, the tables are as well. Special desserts are made for this holiday, with torrijas being one of the most well-known. Bread is soaked in milk and eggs and later fried and covered with honey or sugar, a treat that is reminiscent of French toast. Pestiños are deep-fried fritters that are typical of Andalusia, and Monas de Pascua is an Easter cake found in Catalunya and Valencia.

Semana Santa in Spain is full of extraordinary experiences, beautiful and ornate works of art, and delicious food. Though you may not be able to travel to Seville, Malaga or Zamora for Semana Santa, come celebrate Easter in New York City at one of Socarrat’s three locations.