Traditions in Valencia throughout the Year 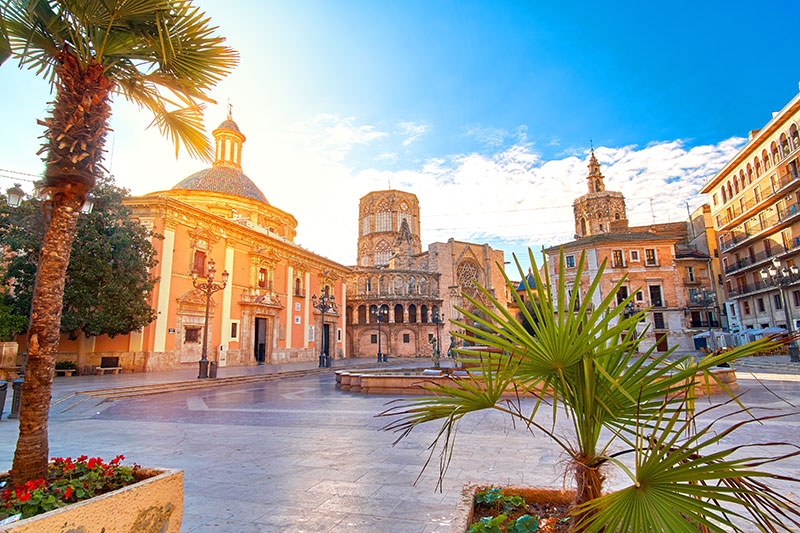 Valencia is the 3rd largest city in Spain, with less tourists than Barcelona and Madrid, making it a more peaceful respite for a few days. But, it’s not always quite: Valencia is home to many festivals and traditions that have now rippled worldwide, making it a destination for both local and world travelers.

Traditions in Valencia throughout the Year

Consider Valencia one of the most festive cities in Spain, if not the world. Valencians find reason to celebrate seemingly everything that their rich culture has fostered throughout the years. Some of the bigger ones are:

Calcotada: onion lovers, rejoice! The calcot onion is grilled over an open fire (kind of like paella), dipped in a nutty sauce called romescu, then devoured – it gets real messy.

February: Carnaval – not as large as the Carnavales in other cities, but it is still a fun celebration that takes place just prior to Lent.

March 12-19: Las Fallas – arguably the largest festival of the year; read more about it here.

August: La Tomatina – the giant tomato food fight. There’s no religious purpose here – it actually started by 2 guys randomly in 1945, and has caught on as an event ever since. Because who doesn’t love a food fight?!

Ceramic Art: you’ll see elaborately painted ceramic tiles adorn entrances and entire walls, tables, and murals, while ceramic plates, vases, and other vessels may take the form of lusterware or ornately painted pieces. If you’re interested in the ceramic art, the best town to visit in Valencia is Manises, which was the ceramic “hub” in the 19th century.

Music & Dance: Valencia is known as the Vienna of Spain because it’s home to more orchestras and bands than any other part of Spain, and it has two classical concert venues.

Most music will be paired with dancers and performers in costumes whose appearance dates back to the city’s Arab and Gypsy times. No matter what the event is – whether a giant festival parade or just a standard Sunday, there will be a band around.

Valencia is where paella originated – you will traditionally find it in the streets cooked over a huge fire on Sundays and on fiesta days, but that’s not the only traditional Valencian food you’ll find:

Arroz a banda: the same rice that’s used in Paella, but instead of plain water, it’s cooked in water leftover from boiling fish, then served with prawns.

Fideua: essentially paella cooked with noodles instead of rice

Arroz Negro: consider this simplified paella, using squid as its main seafood source; the squid is cooked so that the ink soaks all the rice, turning it black (negro).

Arroz al Horno: baked rice that’s very different from paella, as it usually lacks any kind of seafood. Instead, the rice is accompanied by onions, garlic, tomatoes, potato chunks, and chorizo (pork sausage).

You’ll see a lot of all kinds of seafood, given its location: shrimp, lobster, octopus, oysters, and more – it’s likely the freshest you’ll ever eat!

Not a fish fan? Don’t worry too much – there are plenty of arrocerias which focus on rice dishes only. It’s also not very hard to find beef, sausage, chicken, lamb, and pork – which will most often be grilled.

There are two traditional Valencian drinks – one’s sweet and innocent and one’s fiery and a bit misbehaved:

Horchata (orxata): a milk made from tiger nut (technically dairy-free, since tiger nut is a vegetable – yea, it’s not a nut, confusing, we know) that dates back centuries to Valencia’s Arab past. It can be made at home or purchased at a horchateria, akin to getting coffee from a coffee shop. This will often be accompanied by a sweet bread for dipping into the horchata.

Valencians savor the moment, even when it’s not a fiesta. They sip their drinks slowly, and eat their food in smaller portions. It’s rare that someone takes a meal – even a pastry – “to go.

Valencians (and most cities in Spain) take siestas everyday – literally, the entire town will shut down between the hours of 1:30-4:30PM, approximately (seriously, even some pharmacies!). There aren’t many gyms, since everyone gets plenty of cardio by walking or biking in place of traveling by car, or by partying, of course.

Since electricity is relatively expensive, Valencia tends to be a little more eco-friendly; lights, appliances, and air conditioners (if there are any) tend to be on timers.

If the food hasn’t piqued your interest in visiting Valencia, we are sure the festivals have! You can schedule a visit early any time of the year, as Valencia is known as having “300-days per year of sun” – even in winters when the other towns and cities get cold, Valencia remains warmer than most.